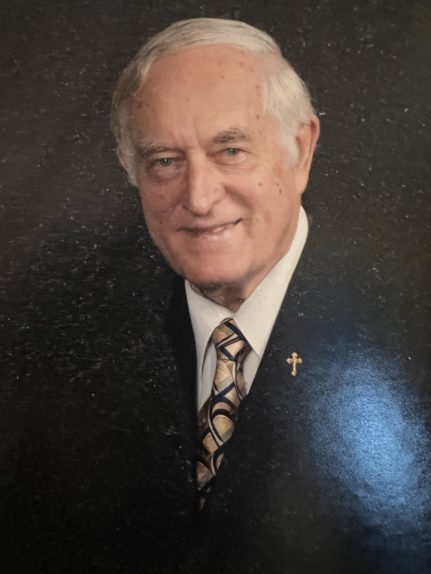 Raymond Robert Popyk, 88, passed away on September 11, 2022. Raymond was born on February 26, 1934 in Hammond, Indiana to his loving and late parents, Onufry and Magdalena Popyk. Raymond was a graduate of Hammond High School and Indiana University Bloomington with a Bachelors Degree in Business Administration and Marketing. He also served in the US Army where he was a trained and qualified marksman.

On June 12, 1960, Raymond married the Love of his Life, Radka (Loretta) Gulaboff, and they celebrated their 62nd Wedding Anniversary this year. God blessed them with their one and only son, Michael (Kelly) Popyk, and their one and only grandson, Matthew.

Raymond began his career in various sales positions. With his aggressiveness and goal to be the best at his job, he never failed to be “Salesman of the Year” which brought him to many travel destinations throughout his career. Raymond retired from Allstate Insurance in January of 1995.

Raymond and Loretta were one of the founding members of Saints Peter and Paul Macedonian Orthodox Church. He was very committed to his alter duties and Christian Faith and was proud to serve the Church in any capacity where he was needed. Raymond was also a very humble and generous man who helped many people and was very proud of his Ukrainian Heritage.

Raymond was preceded in death by his parents: Onufry and Magdalena; brothers: John and Onufry; sisters: Pearl, Ann, and Colleen; in-laws: George and Mara Gulaboff.

Raymond is survived by his wife: Loretta; son: Michael (Kelly); grandson: Matthew; and sister: Helen Kikalos. He is also survived by many cousins, nieces, and nephews in the United States and Canada, as well as many Kumovi and Kumbari.

Visitation and Funeral Services will be held at Saints Peter & Paul Macedonian Orthodox Cathedral on Thursday, September 15, 2022 from 10 AM to 11 AM, followed by funeral services at 11 AM. Fr Georgij Gligorov & Fr Aleksandar Mitrov will be officiating. Interment Calumet Park Cemetery. In lieu of flowers, the family requests donations be made to the Saints Peter & Paul Macedonian Orthodox Cathedral. For any further information please call Mileva or David at 219-736-5840.

Loretta, I am so sorry to hear of Ray’s death. May his memory be eternal.
Kathy ( Shapkaroff) Stelzleni