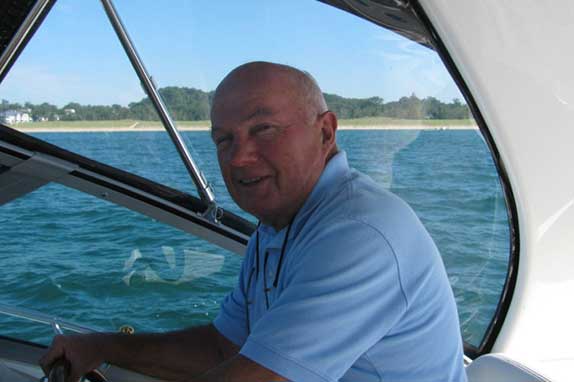 “He enjoyed family vacations to Florida and the mountains of Colorado. In his spare time, he loved power boating with his family. “

Phil was born on July 17, 1938, in Whiting Indiana to Joseph Grenchik and Theresa (Kovacik) Grenchik. Phil grew up in Whiting Indiana spending his childhood at Immaculate Conception Grade school and later graduating from Whiting High School. Throughout his schooling he participated in many sports including basketball, football, and baseball. In 1954, Whiting High School won the mythical state of Indiana football championship. The team consisted of fourteen players who played both offense, defense, and special teams. These players were given the title of the Fourteen Ironmen. Phil was honored to be one of the fourteen, playing right halfback on offense and defensive back. In 1956, Phil was elected class president of Whiting High School. Following High school, he attended St. Joseph College.

Phil held many jobs over the course of his life. One of the most memorable jobs he held as a child was at the National Dairy in Whiting where he was a chocolate milk blender. His first social security contributing job was setting pins at the Whiting Community Center bowling alley earning 10 cents a line. While in college, he worked summers at Youngstown Sheet and Tube and Lever Brothers. In 1958, he became employed by American Trust and Savings Bank where he continued his career for 55 years, retiring in 2016.

In 1961, Phil was drafted to serve his country in the U.S. Army. While serving in the Army, he qualified for the Army Air Defense Radar Command and Rifle team. He shot competitively in matches in Nebraska, Ft. Huachuca, Ft. Carson, and Ft. Riley. After completing his duties in the Army, Phil returned to American Trust and Savings bank. In 1989, he became the President and Chairman of the bank.

As the bank President, he was very influential in opening the first branch office in the Robertsdale section of Hammond, Crown Point, and Porter, Indiana. He was instrumental in expanding the banks insurance department by purchases independent insurance agencies. He was also responsible for incorporating a full-service securities business into the bank.

Other accolades included Director of the Indiana’s Bankers Association for two years and President of the Northwest Indiana chapter of the Bank Administration Institute.

Phil was proud to have raised his family at the homestead in Ogden Dunes for 45 years. He enjoyed family vacations to Florida and the mountains of Colorado. In his spare time, he loved power boating with his family. They traveled to every port on Lake Michigan and the Southwestern shores of Florida. He also enjoyed cross country and downhill skiing. It was on a downhill ski trip with the Gary Ski Club to Boyne Highlands Michigan that he met his wife Carol on a chair lift.