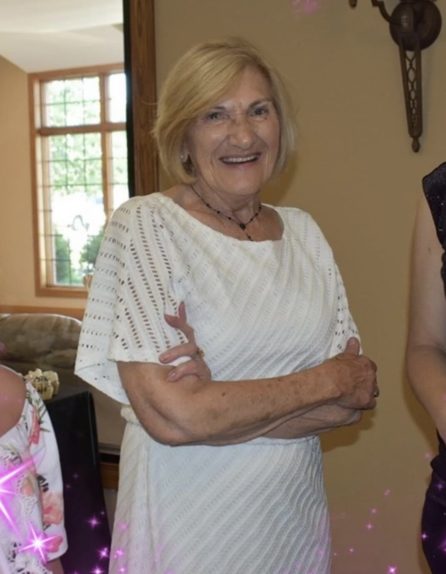 Martha Roknich Lash age 79, of Grosse Ile Michigan, formerly of Northwest Indiana passed away August 16, 2022 at her home.
Martha was a member of St Sava Serbian Orthodox Church, its Kolo Sestara, Choir and worked at the St Sava Church for many years.

Martha loved traveling, theater and sports and would be glued to the TV every year during the NCAA March Madness tournament.  She grew up in Gary Indiana and was a very proud first generation Serbian American. In her youth she attended Serbian camp every year. Later, as a young adult she coached the women’s serbian basketball team for several years.

However, she will be remembered for her love of her family and her church.  She was known by everyone for her strong work ethic and managed Old mill Pizzeria for many years before finding her way back to St Sava. At St. Sava, she was in charge of catering, bookkeeping, Serb Fest and many events planned through the church.

Overall, her family was the most important thing to her. If they needed her she would drop everything and go wherever she was needed.  When her children were young, Marcie was known for coaching her children’s sports teams and attending various sporting events they were involved in.  She was also involved in school activities and later continued this level of involvement with her grandchildren.  She did everything she could to attend family functions all over the world.  Any event her family was involved in she was sure to show up regardless of how far she had to travel.

She was well known for her tight hugs, and her sincere, genuine love of life and laughter. She held tight to her Serbian traditions but marched to the beat of her own drum and lived for the moment.  She will be forever dearly missed by her family and many other close friends and relatives.

It was always a pleasure working church events with Marcie. She worked very hard. Condolences to her family and Kumovi.

We were so blessed to have +Martha (Marcie) in our family. Please accept our deepest sympathies and condolences. I took joy in her friendship and was so grateful to have had the opportunity to become closer to her in recent years. I loved our visits to St, George’s Church in Monroe, Michigan and excursions in and around Grosse Ile. Thank you, Marcie, for everything! Vjecnaja Pamjat!

To: Mark Lash and Family, and to your extended family and close friends
We offer our sincere condolences to you and all of your loved ones. May God give you his peace that comforts all.
I would like to share a poem:
In Spring of Life
We are born to Life
In Birth we journey to be here
This Birth is a true beginning
This Birth is transitioning
This Birth is amazing and growing
This Birth is living and passing on to
even better beginnings
This Birth is winning
CELEBRATE this birth even today

Sharing in your sadness as you remember Marcie.