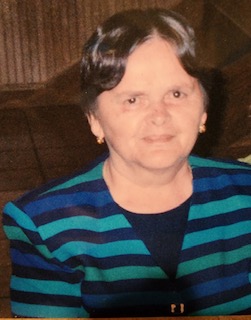 Gjena was a kind and caring woman who had immense love for her family and friends and had a passion for cooking, baking, caring for animals, and gardening.

Born to Stojan and Cveta Kolozegoski on January 4, 1937, in Krivogastani, Macedonia, Gjena was the much-loved oldest daughter in a family of four children. As the oldest child in a tobacco farming family, Gjena left school in 8th grade to help care for her younger siblings and assist with the daily duties of cultivating their family’s farmlands. As a young adult, she was introduced by mutual family friends to Najdo Trajkoski, who would soon become her beloved husband. Gjena began her married life in Sveta, Macedonia, building her new life in the beautiful mountainside community. Gjena and Najdo were blessed with their first child, Valentina, but their joy as new parents did not last long as Valentina became gravely ill and passed away as a young infant.

In 1972, Gjena and Najdo decided to take the big leap and immigrate to the United States to join her youngest sister and her husband, Vera and Boris Velovski, to pursue the American dream. They settled in Gary, IN and Gjena continued her life as a wonderful homemaker while her husband joined the American workforce. In 1975, they were blessed with another daughter, Julie, which finally completed their family of three. In the decades to come, Gjena built a beautiful life with her husband, daughter, extended family and beloved friends, Boris and Cana Papuckoski. She saw Julie graduate high school, college, and enter the workforce, although deep down inside she just wanted Julie to stop traveling for work, get married and become a mom and homemaker like she was.

In 2009, Gjena became ill, but she persevered through her illness to see Julie get married in 2010 to Andrew Spyrison, who became the beloved son she never had and then joyfully greeted her first grandchild, Ronin in 2014, and second grandchild, Remy in 2016. Nothing brought her more joy than when Ronin and Remy would go visit Baba and give her big hugs and tickles.

Gjena was a kind and caring woman who had immense love for her family and friends and had a passion for cooking, baking, caring for animals, and gardening. She was legendary in her community for her zelnici, maznici, and bread, which she baked weekly. She didn’t let living in an urban city with limited greenspace prevent her from engineering beautiful gardens every summer filled with peppers, tomatoes, and her gorgeous red, white, and yellow dinnerplate dahlias. She had a great sense of humor and was loved and respected by everyone who knew her.

Gjena will be missed dearly, but her life will always be celebrated.

My deepest condolences to the entire family. I will forever remember Mrs. Trajkoski’s beautiful flowers, coming to the house and smelling her homegrown peppers boiling, and me learning to ask “is Julie home?” in her native language when I called her house, to facilitate the communication. She was always very sweet and she will be missed. Rest well.

To the family of Gjena Trajkoski, my dearest sympathies. Praying for your family during this time. Mrs. T. was a sweet woman who always had a smile to share. May she rest in peace. She raised a great daughter.