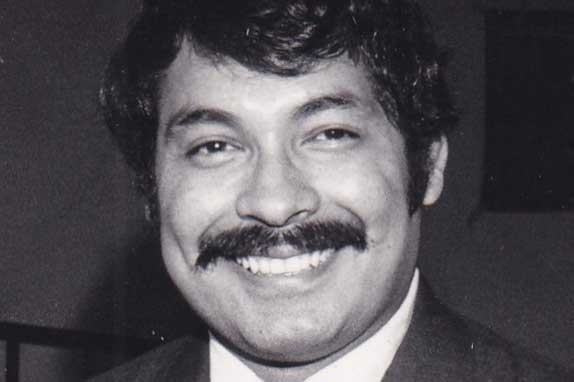 “Frank enjoyed life and had an infectious smile. He was an avid reader with interests in history, languages, literature, and the sciences.”

Francis (Frank) John Morales, 80, of Hobart, IN passed away on Wednesday, June 1, 2022 at St. Mary’s Medical Center in Hobart. He grew up, lived, and worked most of his life in Gary, IN.

Frank is survived by his brothers, Hilbert, Ralph (Lucy), Robert (Nancy), and Guadalupe, many beloved nieces, nephews, other relatives and dear friends. He was preceded in death by his parents, Toribio and Guadalupe; sisters, Rose, Socorro, and Theresa; brothers, Seville, Andrew, Anthony, and Michael.

Frank was a graduate of St. Luke grade school, Bishop Noll High School, DePaul University, and Indiana University. In addition, he has done extensive graduate work in the Romance Languages at Stanford University, Yale University, the University of Chicago, and the University of Michigan in France. He was a member of the Pi Delta Phi National French Honor Society, the National Association of Teachers of French, the National Association of Teachers of Spanish and Portuguese, the American Council of Teachers of Foreign Languages, the National Council of Teachers of English, the Gary Reading Council, the Indiana Association of Adult Educators, and the Indiana Retired Teachers Association. He co-authored a curriculum guide in adult performance objectives for the State of Indiana Department of Education. He was a teacher in the Gary Community School Corporation and before retiring virtually taught at every high school in the system. He also tutored invalid children and taught at the Latin American Family Education program in Gary. He worked for the Gary Model Cities Agency citizens board and the Upward Bound program at Purdue University in Hammond, IN that awarded scholarships to disadvantaged High School students. He also worked at Louis’ Bon Appetit in Crown Point, IN.

Frank enjoyed life and had an infectious smile. He was an avid reader with interests in history, languages, literature, and the sciences. He had a massive library that anyone in search for knowledge would envy. He was a tea drinker and had a collection of tea pots. He had a variety of interests and enjoyed good food, wine, musicals, and classical music. He kept active attending the aerobic classes at the YMCA and spending time with friends. He was a captivating storyteller and would entertain everyone with his jokes. He made donations to many charities and was a longtime supporter of The Humane Society of the United States and the Paralyzed Veterans of America organizations.